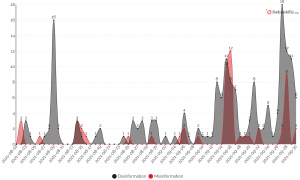 Dynamics of the types of malign information (August 2021 – September 2021) 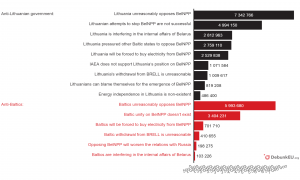 Disinformation about the nuclear plant in Astravets sought to imply that increase of energy prices in Europe are related to actions of Lithuania.

VILNIUS, LITHUANIA , October 26, 2021 /EINPresswire.com/ — Actions taken by Lithuania to stop the flow of cheap electricity from the Belarusian NPP (BelNPP) in the Baltic region caused an increase of the price of electricity to unprecedented heights. Meanwhile, Latvia and Estonia are pushing for solidarity and asking Russia for help as they are facing an energy crisis this winter. These were the main messages spread by Kremlin affiliated media in September.

In September 2021, DebunkEU.org detected 170 cases of false and misleading information directed at Lithuania's position towards BelNPP (41.57% of the reviewed 409 articles). The biggest wave of negative mentions discrediting the Lithuanian position on this issue coincided with the news that Latvia intends to file a complaint with the European Commission against Lithuania for restricting their access to purchase energy from Russia via Belarus.

According to senior analyst at DebunkEU.org Algirdas Kazlauskas, the news about the reduced maximum electricity transmission capacity of the Lithuanian company Litgrid via the Lithuanian-Belarusian connections received a lot of attention in the Kremlin funded media as well.

"This story gave an impetus to various interpretations of this decision made by Lithuania and the alleged revenge planned by Latvia and Estonia. It was claimed that through its unilateral actions, Lithuania puts pressure on the Baltic countries over the BelNPP, causes discord and destroys the unity of partners," says the expert.

For example, rubaltic.ru stated that if Lithuania unilaterally reduces the capacity of electricity networks at the border with Belarus, it will still not be possible to block the BelNPP. Not only that: the Lithuanian government also risks engaging in a serious conflict with Latvia, Estonia, and its people, due to the alleged energy crash coming this winter. Attempts were also made to link the rising energy prices in Europe with Lithuania's fight against the power plant in Astravets.

On September 24, the Baltic News Service (BNS) published a comment from the Latvian Ministry of Economics stating that “there is no technical basis for Litgrid to reduce the total transmission capacity between Lithuania and Belarus. Therefore, the Latvian government has decided that its next step will be communication with the European Commission and the EU Agency for the Cooperation of Energy Regulators”.

"However, in the pro-Kremlin media the message about these plans was conveyed as if everything had already happened," says Mr Kazlauskas.

"For a couple of years now, the Baltic countries have been cherishing the dream of breaking the BRELL electric ring, connecting the electrical systems of Belarus, Russia, Estonia, Latvia and Lithuania, in 2025. However, a sudden disagreement arose between the Baltic states: Lithuanians began restricting electricity supplies from Belarus, fighting against the hated BelNPP next to Vilnius […] Riga has already sent a complaint against Lithuania to the European Commission and relevant EU agencies,” wrote tsargrad.ru.

Some Kremlin-related outlets have suggested that Lithuania's actions prevent Latvia and Estonia from accessing Russian-produced electricity (which is significantly cheaper) and force them to buy expensive electricity from the West. "Such statements are incorrect for several reasons," says Mr Kazlauskas.

First of all, electricity is not bought directly from Russia, and the prices are not set by Russia either. The electricity in the Baltic region is traded through the Nord Pool Spot market, where electricity flows from all producers in the region and the final price in each country is determined by the actual demand-supply ratio.

Thirdly, if necessary, this alleged missing flow to Latvia and Estonia could potentially be offset by the electricity imports from the Kaliningrad region.

In September, Sputniknews.ru, sputniknews.lt and cont.ws distributed the largest share of false and misleading articles about Lithuania's position towards the BelNPP (8.8%, 6.5% and 66.5% of publications, respectively). Ria.ru, mail.ru and sputniknews.ru reached more than half of the total potential audience (26%, 19.8% and 9.4% respectively).

Since the beginning of the development of the Belarusian NPP in 2008, the project has lacked transparency, justified decisions, and has been executed regardless of the concerns of the neighbouring countries and the international community. Its non-compliance with the international standards of environmental and nuclear safety: (1) selection of an unsuitable site for construction; (2) violations of the International Conventions of Nuclear Safety, the Espoo and Aarhus; (3) recurring incidents; (4) irresponsible attitude to environmental impact assessment; (5) not implemented recommendations of the EU stress tests, raises serious doubts about the project’s reliability and real intentions.

Accidents that have occurred in the BelNPP – from serious damages for the reactor vessels to violations of the occupational safety requirements (e.g., since 2012 there have been at least three deaths recorded) – demonstrates that the project developers are challenged by systemic problems, such as poor occupational safety culture, failure to ensure quality control of works, disrespect of instructions, principles of withholding and denying information rather than of openness and transparency dominating the public communication.