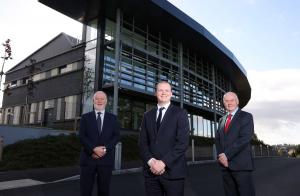 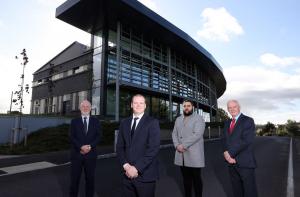 Standing at 8,200 m2, the new, fully accessible, state-of-the-art campus opened its doors to students for the first time at the beginning of September and can accommodate 800 full-time students, 2,000 part-time students and 120 staff.

Designed by Hamilton Architects and constructed by Enniskillen-based Tracey Brothers Ltd, the Erne Campus is one of the world’s most sustainable educational buildings, having secured both PassivHaus Premium and BREEAM Outstanding accreditations.

Speaking after performing the official opening, the Minister said: “I am delighted to be able to officially open this fantastic new educational facility for South West College. The new complex is a superb example of what we can achieve in Northern Ireland and will provide a high quality educational environment for learners for many years to come.

“The building has secured world-class sustainability accreditations, the first in the UK to do so, and the college is looking to capitalise on this by delivering a series of innovative and complementary learning and skills programmes, including wind, biomass, sustainable construction, hydrogen, energy storage and sustainable food.”

The Minister added: “My Department has invested £230million across Northern Ireland’s further education estate in recent years, to give learners of all ages the opportunity to gain qualifications in a wide range of skills areas and boost their employment and life chances, in line with my Department’s 10X Economic Vision and associated Skills Strategy.”

Chief Executive of South West College Michael McAlister said: “We are delighted to officially open the doors to the Erne Campus. A long-standing vision has been achieved today with the opening of this fantastic building which has been designed with the needs of our students, community and industry partners firmly in mind.

“Our talented and committed staff have helped bring this project to life and they are central to the education and training opportunities we offer our students. Today is an opportunity to recognise and celebrate the efforts of all those who have been involved with the development of the Erne Campus, from the earliest planning stages through to the construction and furnishing of the building itself, which is unrivalled globally in terms of its design and sustainability credentials.

“We would not be here in this building today without the unwavering support of the Department for the Economy who worked tirelessly with the project team over the past four years and beyond. Their determination to have this building completed to the highest possible standard is indicative of the Minster’s, his predecessors’ and the Department’s commitment to learners in the South West region and to the continued development of our local economy.”

In addition to a high-end Cyber Centre, students can avail of an ultra-modern Learning Resource Centre equipped with the latest IT equipment and an extensive library of hard copy and digital resources. The Erne Campus also has an array of science labs, computer suites and breakout areas to support STEM education.

Other resources include media suites, training and production kitchens for hospitality and culinary arts, and high specification hairdressing and beauty salons which have been designed to ensure students are industry-ready when they complete their qualifications.

Notes to editors:
1. PassivHaus buildings are constructed according to principles developed by the PassiveHaus Institute in Germany and are certified through an exacting quality assurance process. They are built with meticulous attention to detail and rigorous design and construction techniques to provide a high level of occupant comfort while using very little energy for heating and cooling. In a PassivHaus Premium building, typically far more renewable energy is produced than is needed. It is therefore a goal for the particularly ambitious: building owners and designers who want to go beyond what economic and ecological considerations already propose.
2. BREEAM New Construction consists of forty nine individual assessment issues spanning the nine environmental categories, plus a tenth category called ‘innovation’. Each issue addresses a specific building related environmental impact or issue and has a number of ‘credits’ assigned to it. ‘BREEAM credits’ are awarded where a building demonstrates that it meets the best practice performance levels defined for that issue. BREEAM outstanding is the highest rating available and is achieved by less than 1% of UK new non-domestic buildings.
3. The Department may take photographs and videos at announcements and events to publicise its work. Photographs, interviews, videos or other recordings may be issued to media organisations for publicity purposes or used in promotional material, including in publications, newspapers, magazines, other print media, on television, radio and electronic media (including social media and the internet). Photographs and videos will also be stored on the Department’s internal records management system. The Department will keep the photographs and recordings for no longer than is necessary for the purposes for which they have been obtained. The Department’s Privacy Policy is available on our website.
4. Follow us on Twitter @Economy_NI http://twitter.com/economy_ni
5. For media enquiries contact the Department for the Economy Press Office at pressoffice@economy-ni.gov.uk .
6. The Executive Information Service operates an out of hours service for media enquiries only between 1800hrs and 0800hrs Monday to Friday and at weekends and public holidays. The duty press officer can be contacted on 028 9037 8110.