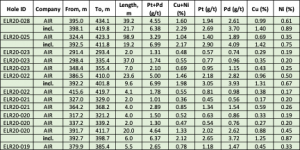 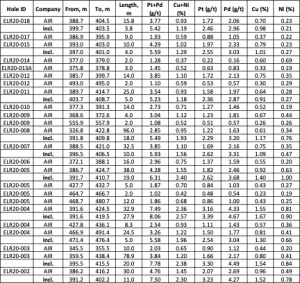 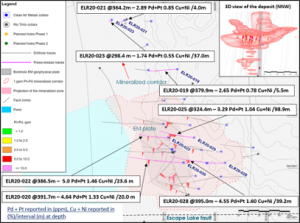 The new results continue to confirm dimensions and extend the Escape Lake deposit that remains open to the northwest and southeast.”
— Abraham Drost, CEO

All seven holes drilled hit the mineralized zone and include the following highlights:

Abraham Drost, CEO of Clean Air Metals stated that “the new results continue to confirm dimensions and extend the Escape Lake deposit that remains open to the northwest and southeast. This has implications for upside tonnage potential as part of the upcoming mineral resource evaluation by Nordmin Engineering at both the Current Lake and Escape Lake deposits. The Current Lake Deposit is being evaluated by Nordmin as a ramp accessible, underground high-grade selective extraction operation. The Escape Lake magma conduit is being looked at a potential future source of feed. With the emerging greenfields exploration play being generated with magnetotelluric survey techniques, the Thunder Bay North asset is quickly becoming a “three in one” project situation with a number of possibilities to increase shareholder value (Figure 2).”

Clean Air Metals has adopted COVID-19 avoidance and personal protection measures for its geological staff, drilling contractor and service suppliers. Personnel are required to maintain physical distance, use Personal Protective Equipment (PPE), self-monitor and self-isolate or elect to work from home. Management had previously eliminated plans for a camp setup to service a planned diamond drill campaign on the Escape Lake Project. The Company is aware of Thunder Bay Health Unit guidelines that provide for “mandatory” self-isolation for returning overseas travel. The guidelines also “strongly recommend” self- monitoring and self-isolation as needed after travel into the Northwest region from other areas of the Province and interprovincially. Mineral Exploration and Development has been deemed an essential service in the Province of Ontario (http://www.netnewsledger.com/2020/03/23/ontario-covid-19-business-allowed-to-remain-open-list-march-23-2020/ ). The Company has procured the services of a locally staffed and serviced diamond drilling contractor to complete the diamond drilling program.

Mr. Allan MacTavish, P.Geo. a Qualified Person under National Instrument 43-101 and VP, Project Manager of the Company, has reviewed and approved all technical information in this press release.

Clean Air Metals and its wholly-owned subsidiary Panoramic PGMs (Canada) Ltd. acknowledge that the Escape Lake and Thunder Bay North Properties are on the traditional territories of the Fort William First Nation, Red Rock First Nation and Biinjitiwabik Zaaging Anishinabek, signatories to the Robinson-Superior Treaty of 1850. The parties have entered into a Communication Protocol and are committed to ongoing updates and dialogue around the Thunder Bay North Project.

Clean Air Metals' flagship asset is the 100% owned, high grade Thunder Bay North Project, a platinum, palladium, copper, nickel project located near the City of Thunder Bay, Ontario and the Lac des Iles Mine owned by Impala Platinum. The Clean Air Metals project hosts the Current Lake deposit and magma conduit and the Company is actively exploring the Escape Lake deposit, a twin structure to the Current Lake deposit. Executive Chairman Jim Gallagher and CEO Abraham Drost lead an experienced team of explorers, researchers and engineers who are using the Norilsk magma conduit stratigraphic and mineral deposit model to guide ongoing exploration and development studies. As the former CEO of North American Palladium Ltd. which owned the Lac des Iles Mine prior to the sale to Impala Platinum in December 2019, Jim Gallagher and team are credited with the mine turnaround and creation of significant value for shareholders.

ON BEHALF OF THE BOARD OF DIRECTORS
"Abraham Drost"
Abraham Drost, Chief Executive Officer of Clean Air Metals Inc.