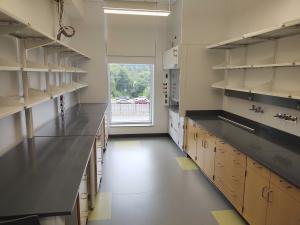 Natrion engineers safer and more affordable large-scale batteries that will make solar power cost-effective for homes, farms, and the military. At KSTI, Natrion will receive resources critical to developing their business — including office and lab space, mentorship, and access to programs like the New York State Energy Research and Development Authority-funded Clean Energy Incubator. KSTI’s member companies have featured battery startups such as C4V, Ashlawn Energy, and Imperium3 — New York’s first lithium-ion battery gigafactory operator. The Board of KSTI’s Clean Energy Incubator Program is led by Chairman M. Stanley Whittingham, a professor of chemistry at Binghamton University and one of the three winners of the 2019 Nobel Prize in Chemistry for his contributions to the invention of the lithium-ion battery.

Natrion’s primary research and development laboratory will now be located at KSTI. The company will be collaborating with the team of Hao Liu, an assistant professor in inorganic and materials chemistry at Binghamton, on improving the longevity and power capacity of the company’s solid-state sodium-ion battery technology. “The battery ecosystem here in Binghamton is truly amazing, and we cannot be more excited about this opportunity to work with KSTI and Professor Liu. We’ve got everything and everyone that we need to take our company to new heights,” said Alex Kosyakov, CEO of Natrion.

About Natrion: Natrion engineers safer and more affordable large-scale batteries that make solar power cost-effective for homes, farms, and the military. The company was started in 2018 by college students Alex Kosyakov and Tom Rouffiac at the University of Illinois. Before moving to Binghamton, NY, Nation was a member of Illinois’ iVenture Accelerator’s Cohort 6, receiving funding and mentorship to support research and development. Natrion is currently working towards a 2023 launch of its System6 solid-state sodium-ion energy storage system. For more information, go to www.natrion.co.

About KSTI: The beginnings of the Koffman Southern Tier Incubator (KSTI) can be traced back to 2012, when Binghamton University collaborated with SUNY Broome Community College and state and local officials to build a facility in Binghamton’s urban core dedicated to providing the resources needed by energy, electronics, and health companies. Aside from labs and co-working spaces, KSTI also provides members access to programs like the New York State Energy Research and Development Authority-funded Clean Energy Incubator. Learn more at: www.southerntierincubator.com.