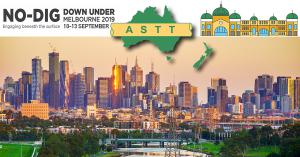 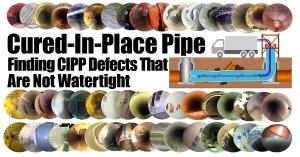 Widespread Use of Cured-In-Place Pipe (CIPP) for Trenchless Rehabilitation Results in Increase Demand for Early Warning QA/QC of Leaks, Pinholes, and Liner Permeability. 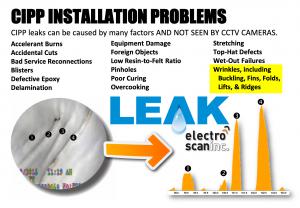 CIPP leaks not seen by visual inspection or CCTV cameras. 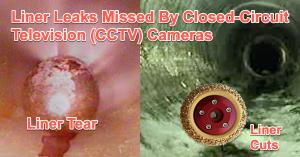 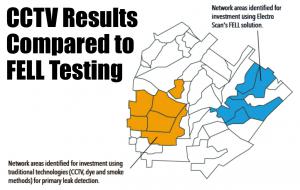 It's hard to tell a utility that their pipe leaks more after CIPP lining. But it happens more often than not, despite using high resolution CCTV cameras after customer laterals are re-opened.”
— Chuck Hansen, Chairman & Founder, Electro Scan Inc.

Today, a large percentage of CIPP liners installed worldwide undergo little to no testing for watertightness and simply rely on a video inspection — after installation — to ensure that a smooth liner has been installed and that all lateral connections were re-opened.

While CIPP lining technologies have improved since their original introduction in 1972, the ability for contractors to achieve consistent quality installations has not yet been demonstrated.

Recently, over 160km (100 miles) of condition assessment projects — using the new inspection standards — were announced in the U.S., including a 50km (30 mile) project for Hillsborough County, Florida, and a 35km (22 mile) project for the City of Kansas City, Missouri Smart Sewer program.

FELL testing of CIPP is fast, accurate, and repeatable, and can be scheduled immediately following curing, allowing contractors to make needed repairs, prior to Owner Acceptance.

If a low voltage circuit is established between the inside of a pipe and the surface, a leak location can be digitally mapped to the closest 1 centimeter or 3/8 inch with the amount of electric current converted to liters per second or gallons per minute using Electro Scan's cloud-based application.

Results are available in minutes on its cloud-based application developed & managed by Hansen Analytics LLC, without the need for third-party data interpretation.

Electro Scan equipment can be purchased directly by a water utility and added to nearly a dozen brands of CCTV trucks or vans, to conduct their own legacy CIPP inspection projects and to prioritize pipes for rehabilitation that are not accurately selected using traditional TV cameras.

Alternatively, Electro Scan services can be provided by authorised FELL contractors, licensed on a project-specific basis.

The new FELL standard for CIPP can also be used to assess a variety of new & existing pipe materials, including metallic pipes that have epoxy linings or are cement-mortar lined and Spray-In-Place Pipe (SIPP) coatings.

Today, water utilities in Australasia have an incentive to adopt the new standard to safeguard their capital investments and protect the environment from sewerage leaks that may contaminate local water supplies and contribute to water losses that may occur before arriving at a customer's tap.

The industry has long recognised the benefits of CIPP compared to conventional dig & replace.

Yet, test coupons or samples taken at the end of a lined pipe are not representative of full-length 360-degree liner quality and CCTV cameras cannot judge watertightness of CIPP liners.

Since Closed-Circuit Television (CCTV) operators are not able to tell the difference between superficial cracks and cracks that go through a pipe wall or joint, industry experts have long acknowledged that manually-operated cameras and subjective coding of defects were never meant to warrant CIPP liners as structurally-sound or leak-free.

The larger the number of leaks, pinholes, and permeable surfaces in CIPP liners, the higher the risk a relined pipe will not perform throughout its useful life.

Once a liner is pulled through a sewer or water main it must be inflated, heated, and cured, to create a new pipe.

Typically using boiling water or steam to form a new pipe, a variety of problems can occur that result in undetected leaks.

Common defects that cause leaks — not detected by visual inspection — include overcooking the liner, failure to maintain minimum resin-to-felt ratios, and accidental cuts attempting to reinstate customer lateral connections.

"It's hard to tell a utility that their pipe leaks more after CIPP lining. But it happens more often than not, despite using high resolution CCTV cameras after customer laterals are re-opened," stated Hansen.

During the installation process, CIPP liners will temporarily prevent water & sewer flow between residential households and businesses to their respective main.

Relying on specialized equipment to cut a precise opening in the wall of the liner to reconnect the customer service, proper care must be taken to reinstate laterals on the first attempt.

If measurement of a lateral's location & position is not consistent with prior readings, or off by as little as a centimeter or a half-inch, damage to the host connection may occur that was not present before CIPP lining.

And, new holes may increase the total defect flow in pipes, even after rehabilitation.

Operators that miss a customer's service location might cut a test hole to find its location.

Commonly referred to as "poke and hope," intentional & unintentional cuts in CIPP liner walls may go unnoticed by visual inspection and compromise a pipe's structural integrity and watertightness.

"By identifying laterals that do not leak 'before' rehabilitation, utility operators can easily judge the quality of a contractor's lateral reinstatements by comparing before and after test readings," states Hansen.

Use of inappropriate equipment can also cause leaks in newly lined pipes, not seen or recorded by CCTV operators.

Like putting on new tires or chains to travel through snow or rough terrain, contractors may use rough-edged wheels, re-fitted onto CCTV cameras or other devices, after lining, to gain more traction and less wheel spinning.

Provided to help maneuver heavy equipment inside of CIPP lined pipes, most tenders or specifications do not prohibit the use of potentially harmful wheels.

Able to dig tracks in the bottom of poorly lined pipes, and not easily seen by CCTV, the new standard readily locates & quantify leaks caused by equipment.

In 2015, WRc plc (Swindon, England) executed a Strategic Marketing Agreement to offer Electro Scan Services on an exclusive basis in the UK.

As the majority shareholder for Hansen Australasia Pty, Hansen's Melbourne office on Collins Street employed over 60 employees prior to the company's sale to Infor Global in 2007 for US$100 million.