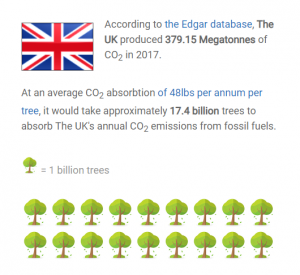 BIRMINGHAM, WEST MIDLANDS, UNITED KINGDOM, May 15, 2019 /EINPresswire.com/ — How many trees would it take to absorb the UK’s CO2 emissions? That’s the question posed (and answered) by a new online calculator from Heating Force.

The UK based heating advice site recently launched a tool which works out how many trees it would take to absorb each country’s emissions from burning fossil fuels.

And according to Heating Force it would have taken 17.4 billion trees to absorb the UK’s emissions in 2017 alone.

Heating Force founder Grant Draper explains why they developed the tool, “Carbon emissions are reported in Megatonnes, which can be hard to visualise. Telling someone that the UK produced over 379 Megatonnes of CO2 in 2017 probably won’t mean much – what does a Megatonne of carbon look like? Showing that it would take 17.4 billion trees to absorb that carbon makes the figure easier to understand.”

The tool also calculates how many trees it would take to absorb the per capita emissions for each country, with each UK citizen reportedly producing enough carbon to fill 262 trees per year.

And according to Heating Force it would take almost a trillion trees to absorb the emissions from just 5 countries (China, USA, India, Russia, Japan), who were responsible for 58% of the planet’s CO2 emissions in 2017.

The online tool, called “How Many Trees”, is available on Heating Force’s website at https://heatingforce.co.uk/howmanytrees/ with the UK’s contributions shown here.